On the March 21 broadcast of Radio Star, BIGBANG’s Seungri and Wanna One’s Kang Daniel, Ong Seong Woo, and Park Woo Jin discussed how lines were distributed for their respective groups.
Ong Seong Woo explained that if he personally was given a part he wasn’t confident about or was too high for him, he would ask another member if they wanted to take it. He added that he was better at parts where he belts out, similar to his part in “Energetic.”
Seungri revealed, “For BIGBANG, the parts are almost all [decided] by G-Dragon. That’s because he produces them. He just decides the parts beforehand, ‘Here is the part Seungri sings, here is the part where Taeyang sings.’ He decides and makes the song. We can’t change it.”
Kim Gu Ra interjected, “Don’t you have any complaints about that?” Seungri continued, “That’s why I said once. [My parts] are too similar! I keep being assigned parts that [have a similar feel] to them.” The youngest BIGBANG member demonstrated what he meant, and sang his lines from “BAE BAE” and “FXXK IT.” 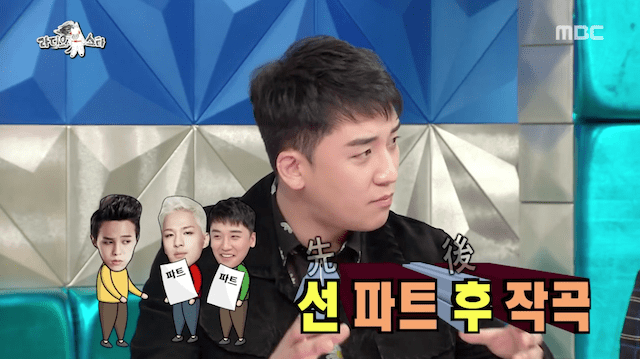 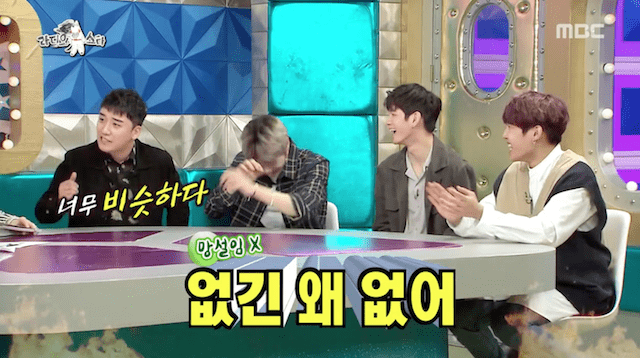 “I remember there was a song where you sing in the chorus,” Cha Tae Hyun commented.
Seungri exclaimed, “I did, in a song called ‘Loser.’ But the funny thing is, I did sing the chorus, but GD and T.O.P sing with me at a lower pitch. At music broadcasts, the cameraman will be looking for me but then film GD and T.O.P.” He jokingly added, “What’s the point of me singing passionately when they’re just going to film G-Dragon?”
Check out the full episode below!
Watch Now
Source (1)