Skip to content
Your browser does not support JavaScript, or it is disabled．Please check the site policy for more information.
The Asahi Shimbun
Business
article
THE ASAHI SHIMBUN
April 1, 2022 at 16:12 JST 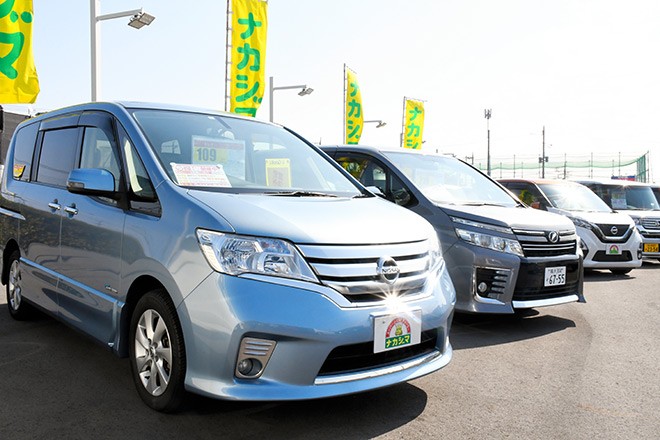 A used car dealer in Saitama Prefecture (Junichi Kamiyama)
The shortage of semiconductors and auto parts that forced a protracted decline in vehicle production by major automakers is creating strong ripples into other parts of the auto market.
Consumers are turning to used cars in droves because of the months-long waits before they can finally get their hands on a new one. And that increase in demand is jacking up the prices of used cars.
One owner of an auto dealership in Hiroshima city that provides both new and used vehicles was amazed at how much prices have risen in such a short time.
“This is an abnormal situation because having new and used cars selling for the same price was unthinkable just a few years ago.”
USS Co., based in Aichi Prefecture, is the largest operator of used car auctions. In February, the average price of cars in deals that closed came to 1.006 million yen ($8,200), an increase of 20.1 percent over February 2021.
It marks the first time the average price exceeded 1 million yen since the company began keeping tabs in April 2009.
The Hiroshima auto dealer said higher prices for used cars are not necessarily a blessing for the company.
“We receive no benefits from higher prices for used cars,” the company president said. “I want the market to stabilize as soon as possible.”
Overall sales have actually dropped at the Hiroshima outlet, due in part to stagnant sales of new vehicles.
Used car dealers are facing a dire outlook because so many of them are small in scale. That means many will strive to suppress prices to attract customers. But that will lead to little profit.
One used car dealer in Saitama Prefecture said it is unable to pass the higher cost of acquiring a used vehicle onto consumers.
About the only good news for the used market comes from the economic sanctions levied on Russia.
They have led to a stoppage of used car exports to Russia, which until now accounted for about 10 percent of all used car exports. Having more used cars on the domestic market could lead to a decline in prices.
But used cars are not the only vehicles rising in price.
Imported car prices have also shot up because of the higher costs for parts and supplies.
The major European automaker Stellantis, which has Fiat and Peugeot under its wing, will raise its prices by as much as 7.1 percent from April, a company official said.
Among the major automakers in Japan, production and sales continued to decline year-on-year, due to the difficulty of securing semiconductors and parts.
February marked the seventh straight month production declined year-on-year and the eighth straight month of lower sales.
The slowdown in new vehicle production began last year as the novel coronavirus pandemic led to closure of auto parts plants in various parts of Asia.
The strong quake that struck the Tohoku region in March also forced a suspension of production at auto plants and parts manufacturers.
(This article was written by Naoyuki Fukuda, Junichi Kamiyama and Takuro Chiba.)
Driven by stay-at-home demand, used car prices surge
Chip shortage sours Christmas mood for seekers of game consoles
Parts shortages, COVID-19 cases causing reduced auto production
Keeping up with the Joneses in China used to mean a new car
Car navigation system makers searching for road to success
Tokyo unmanned test convenience shop to open amid staff shortages

Visit this page for the latest news on Japan’s battle with the novel coronavirus pandemic.

Cooking experts, chefs and others involved in the field of food introduce their special recipes intertwined with their paths in life.

The Asahi Shimbun aims “to achieve gender equality and empower all women and girls” through its Gender Equality Declaration.

Let’s explore the Japanese capital from the viewpoint of wheelchair users and people with disabilities with Barry Joshua Grisdale.
In-house News and Messages
BACK TO TOP
Copyright © The Asahi Shimbun Company. All rights reserved. No reproduction or republication without written permission.