The ASU Lodestar Center for Philanthropy and Nonprofit Innovation graduated its eighth Public Allies Arizona class on June 27 at the AE England Building on the Downtown Phoenix campus of Arizona State University.
Public Allies Arizona, about to begin its ninth year at ASU, is an AmeriCorps national youth leadership organization that recruits, places and develops leadership skills in dedicated, service-minded individuals who engage in paid, 10-month apprenticeships placed throughout local nonprofit partner organizations. Allies are diverse and passionate individuals interested in social change and making a positive impact in their community.

An international team, led by ASU scientists, has published a first-of-its-kind study that shows the first glimpse of the action in photosynthesis that has produced all the oxygen on our planet.
An international team, led by Arizona State University scientists, has published today in Nature a groundbreaking study that shows the first snapshots of photosynthesis in action as it splits water into protons, electrons and oxygen – the process that maintains Earth’s oxygen atmosphere.
“This study is the first step towards our ultimate goal of unraveling the secrets of water splitting and obtaining molecular movies of biomolecules,” said Petra Fromme, professor of chemistry and biochemistry at ASU. Fromme is the senior author and leader of the international team, which reported their work in “Serial time-resolved crystallography of photosystem II using a femtosecond X-ray laser,” in the July 9 online issue of Nature. 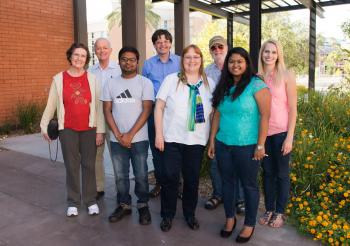