I’ve found myself covering a lot of retail over the past few years. It’s a sector that was written off and left for dead by some investors during peak pessimism, but I think is now pretty generally recognized as merely a sector in flux. E-commerce has transformed the way customers shop, and it has forced traditional retailers to adapt or go out of business. Honestly, for most of the stores that you would find in a mall, I’m not so sure that they present a compelling reason for consumers to continue to keep them in business. However, I think there is considerable value to be found in home improvement stores, discount retailers, dollar stores, and automotive parts stores.
Specifically, each one of these types of retailers has shown that it can hold up to the shifts in consumer preferences, and many are adopting an omni-channel approach that has worked well. I want to look today at Advance Auto Parts (NYSE:NYSE:AAP), which operates an auto parts retailer, albeit as the laggard in the sector.

There are a few key factors contributing to the sector’s resiliency. Many people buy auto parts when it’s an emergency and they can’t wait for an item to be shipped. There are definitely times when this isn’t the case, and websites like RockAuto.com are useful in that regard, but there will always be a place for the brick and mortar location to pick up quick parts to get back on the road. Many consumers also like having someone at these auto parts stores do basic tasks like replacing wiper blades for them or swapping out batteries. Additionally, many DIY consumers need advice or assistance in determining what part should be used, what tools are required for the job, etc.
Also, cars are only getting more complicated, which means that some things can’t be done by the average consumer, but also that they are more likely to need the help of tools offered by these auto parts stores. Advance offers services like tool rentals, how-to videos, oil and battery recycling, and diagnostics, much of it for free to get customers in the door and build a meaningful relationship over time.
The average age of vehicles on the road reached 11.8 years in 2019, up from 10.6 years in 2010, and the IHS projects that the amount of vehicles on the road >16 years old will rise 22% from 2018 to 2023, reaching 84 million. This is a macro tailwind for auto parts stores, with older cars on the road requiring more maintenance, and more parts. Within the auto parts industry, scale is important for distribution and to maintain adequate inventory, providing a relatively high barrier to entry for competitors.

Looking at the main players in the auto parts retailer industry, including AutoZone (NYSE:AZO) and O’Reilly (NYSE:ORLY), Advance has long been a laggard, although its revenue is mostly in line with its peers. The gap comes from the company’s significantly lower margins over time.

Looking at the sector’s margins, it’s pretty obvious that Advance is the laggard. Starboard Value has a stake and it makes sense considering the company should be able to drive pretty significant margin expansion to at least partially catch up with its peers, which would drastically improve profitability. The company is projecting positive comp sales this year in the 1-1.5% range, and sales growth in the most recent quarter was 1.6%. These aren’t numbers that make me excited as an investor, but it is worth keeping an eye on whether Advance can start to accelerate its revenue growth while keeping costs in check.
The company does have around 20% of its stores as independent vice company controlled, which are lower margin, but the disparity between the other two major players in the sector and Advance shows material underperformance. Management has committed to several initiatives to improve margins, and spoke some to its performance on the earnings call:

“We had a couple of atypical elements in the gross margin in the quarter. The biggest factor within gross margin was our investments in our loyalty program. The coupon redemptions in the quarter were up $14 million versus a year ago, which is what we outlined in our prepared remarks. We knew this was going to be higher in the quarter as we planned investment behind Speed Perks 2.0, but the sign-ups and the transactions as a percentage of our total transaction significantly exceeded that of our lead market. So the coupon redemptions were more than we expected.
Over the long term, this is a very good thing. We’re absolutely committed to winning in DIY omni-channel, and we haven’t meaningfully invested in our loyalty program prior to Q3. The customer and team members response to Speed Perks 2.0 has been fantastic, and it positions us well for the long term. We’re going to leverage the first-party data we get from Speed Perks to personalize our offerings and we expect the incremental investment on Speed Perks to subside over the next few quarters as the incremental grow. So that was a very big factor in gross margin in the quarter.”
Investments in the company’s customer loyalty program are definitely a smart move, so I don’t think it’s important to focus too much on the short term. The original SpeedPerks program only accounted for 25% of sales, which does not compare favorably to the loyalty programs at other retailers. Early data from the new program showed a 45% growth in loyalty program transactions, while driving a 39 bp compression in gross margin off of the coupon activity. It will be important to monitor the improvements over time in margin as a way of seeing how well management is executing its turnaround.
Operating margin in the most recent quarter improved 36 bps to 8.9%, and the company is investing in shifting its supply chain by aligning each store to its most logical distribution center. Additionally, the company is focused on improving penetration of its private label goods, currently at ~40% of sales. In that regard, the company recently announced the acquisition of DieHard from Transformco (Sears). From the Wall Street Journal:
“We are excited to acquire global ownership of an iconic American brand. DieHard will help differentiate Advance, drive increased DIY customer traffic and build a unique value proposition for our Professional customers and Independent Carquest partners. DieHard has the highest brand awareness and regard of any automotive battery brand in North America and will enable Advance to build a leadership position within the critical battery category,” said Tom Greco, president and CEO, Advance Auto Parts.
The acquisition will cost $200M from cash on hand, and it should improve Advance’s position in batteries, which is one of the fastest growing categories for the company. Additionally, the company recently launched a partnership with Walmart (NYSE:WMT), with Advance products being sold on Walmart.com for pickup in store. Early news from management is positive, as a majority of customers so far have been new to Advance.
The CEO, Tom Greco, came over from PepsiCo (NYSE:PEP) in late 2016 and is new to the industry. Everything I have read about his time at PEP is positive, but his lack of experience in the industry is something investors should consider when looking at the viability of an Advance turnaround.

Looking at selling, general, and administrative expense as a percentage of sales, a key metric in the retail industry to show a company’s ability to drive profitable sales growth, Advance is again the laggard, although the difference is not quite as stark as in operating margin. The trend is not good for Advance, although ORLY shows a marked increase in expenses as well. Prior to me being convinced that the turnaround is gaining traction, I would want to see the company meaningfully lowering its SG&A expenses and improving margins. 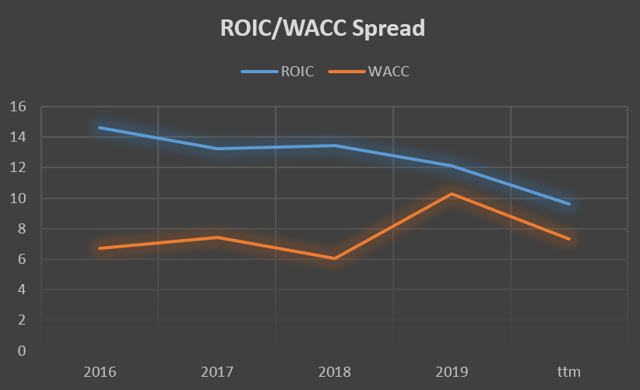 Looking at Advance’s returns on invested capital as compared to its weighted average cost of capital, the trend is not good, and neither is the spread. That being said, ROIC is still > WACC, which shows that shareholder value is not being destroyed, but to put things in perspective, AZO’s most recent ROIC was ~45% (GuruFocus), and ORLY’s was ~30% with WACCs in the same ballpark. This profitability metric shows how well a company can allocate its capital, and I grade AAP poorly. However, along with the other metrics looked at today, if the turnaround starts to gain traction, this metric will show improvement as profitability improves.

The last few years have seen improvements in free cash flow, even as the company is driving significant investment to attempt to turn its operations around. Long-term debt is <2X FCF and manageable, and the dividend is tiny and easily covered. AAP’s financial position at a glance seems stable. 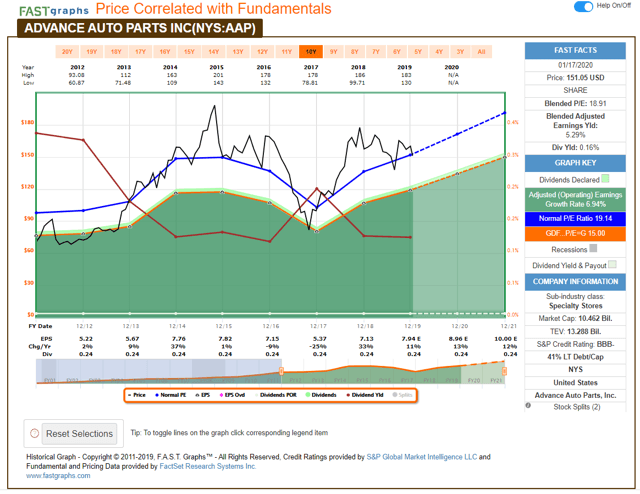 Looking at a valuation graph, Advance seems to be trading right around its average of ~19X earnings, with the earnings growth estimates going forward looking good. The bounce back off of the lows shows that near the end of 2017 was a good time to jump in on Advance. Looking at the company’s peers, AZO trades right at an 18X P/E ratio, and ORLY trades at 24X. Based on the metrics looked at above, I don’t see a compelling reason to buy Advance at a more expensive ratio to earnings than AZO. 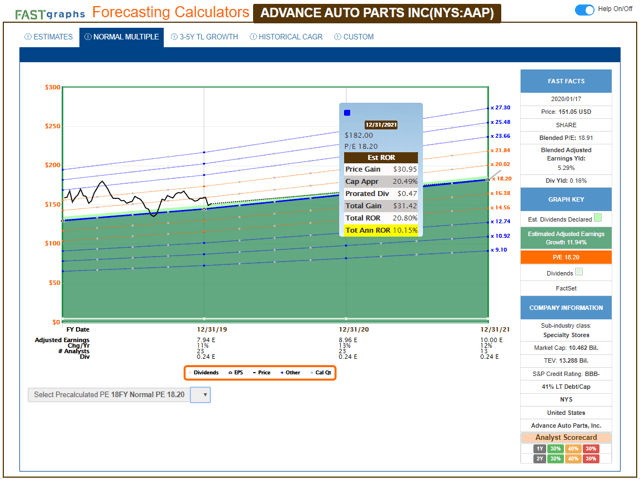 Based on analyst estimates for earnings growth and maintaining the company’s current valuation, an investment today could yield ~10% annualized. There is definitely a case to be made that Advance has a very obvious profitability gap between it and its peers that could allow for outsized gains over the next few years as the company drives meaningful margin expansion. That being said, that is far from assured. I am surprised to see Advance trading at a 19X earnings multiple with its chronic underperformance. When gauging the investability of a turnaround story, it’s hard to justify for me when I can just go buy the leader in the space at a cheaper multiple, even if it may come with somewhat slower earnings growth. I look forward to watching from the sidelines, and I will likely do a deeper dive into AZO in a future article.
If you liked this article and would like to read more covering the Canadian banks, please click the “Follow” button next to my picture at the top and select Real-time alerts. Thanks for reading and please leave a comment below.
Financial statistics were sourced from Morningstar, with the charts and tables created by the author, unless otherwise stated. This article is for informational purposes only and represents the author’s own opinions. It is not a formal recommendation to buy or sell any stock, as the author is not a registered investment advisor. Please do your own due diligence and/or consult a financial professional prior to making investment decisions. All investments carry risk, including loss of principal.
This article was written by
Disclosure: I/we have no positions in any stocks mentioned, and no plans to initiate any positions within the next 72 hours. I wrote this article myself, and it expresses my own opinions. I am not receiving compensation for it (other than from Seeking Alpha). I have no business relationship with any company whose stock is mentioned in this article.